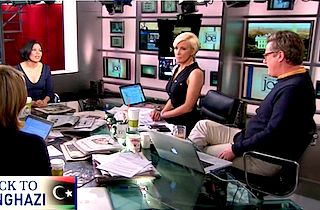 Thursday morning’s Morning Joe panel addressed the resurgence of Benghazi as a controversy following the release of a White House email, which, depending on your viewpoint, is either a smoking gun exposing a coverup or another detail in a largely settled narrative. Host Joe Scarborough and MSNBC anchor Alex Wagner were quickly were at odds with each other over the significance of the email, specifically whether it warranted the opening of another congressional inquiry.

“Reread that email,” Wagner suggested. “Everybody has focused on one of the talking points; the others are totally benign, exactly what you’d expect from the White House. The fourth one I think is open to interpretation; there’s going to be a lot of litigation that will continue about that. But for this to launch 1,000 ships—”

“I’m not,” Wagner replied. “I believe the number one talking point on that e-mail was our job is to keep Americans safe, we will not waiver in that.”

“Fantastic,” Scarborough said, with perhaps a trace of sarcasm in his voice. “That doesn’t negate, though, what happens at the end.”