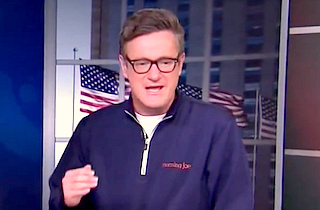 One day after BBC reporter Tim Willcox apologized for his much-criticized statement about Israel and Palestine, Morning Joe host Joe Scarborough lit into him and the rest of “left-leaning media” for trying to paper over anti-Semitism because “it doesn’t fit their political agenda.”

Willcox had been speaking at Sunday’s Paris Unity Rally to a daughter of a Holocaust survivor, who told him of growing fears of anti-Semitism in France. Willcox responded that “many critics, though, of Israel’s policy would suggest that the Palestinians suffer hugely at Jewish hands as well.” (He later called it a “poorly phrased question” and “entirely unintentional.”)

“I cannot believe the BBC is going to allow this man to stay on the BBC,” Scarborough said Tuesday, adding that “some other people” had been trying to obscure the anti-Semitic motives of recent terrorist attacks, including the hostage takers who commandeered a kosher grocery in Paris last week.

“For people in Europe that don’t understand why Israel exists, take what happened last week and multiply it 2 million times,” Scarborough said. “The fact that the BBC has someone insensitive and cold to the realities — this did not happen 300 years ago! This happened 60, 65 years ago, while Europe sat by and did nothing. They let 6 million Jews be exterminated. This is why Israel exists. And people need to get a hell of a lot more sensitive to it, even if they are left-leaning media members.”