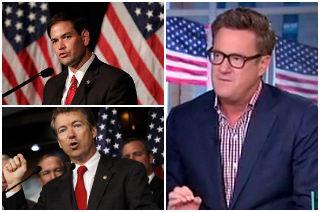 On Morning Joe Thursday morning, Joe Scarborough pleaded with rising members of his party to stay in the Senate and gain experience rather than immediately throw their hats into the 2016 presidential ring, citing President Barack Obama’s tenure as proof that inexperience leads to underperformance.

“It is so clear watching Marco Rubio fumble through one situation after another, that he’s not ready,” Scarborough said. “Would Barack Obama have been a much better president if he’d actually waited a couple of years? Hell, yeah! Is Marco Rubio, is Rand Paul, are any of those guys ready? It’s not a knock on them personally, they just got there.”

“You talk about these guys just getting there or being there for an hour, I’m not sure that matters,” co-host Mika Brzezinski said. “Are they distinguished characters?”

“It’s the same exact thing,” Scarborough said. “[Obama] came in ill-equipped to be the leader of Washington, D.C. Rand Paul, if he ran for president and won, would be ill-equipped. Marco Rubio, ill-equipped. Stay there for more than a few minutes.”

“This is nothing personal about Barack Obama,” Scarborough finished. “I’m not going to let you fix my car, and I’m in the middle of the desert, if you don’t have experience.”