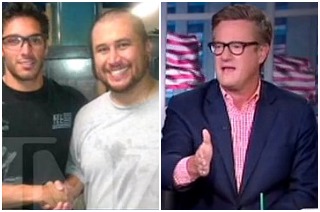 Joe Scarborough and the Morning Joe panel expressed ubiquitous shock and outrage at George Zimmerman’s tour of a factory that made the gun he used to kill Trayvon Martin, arguing that the action should cause those lionizing Zimmerman as a “hero” to think twice from now on.

“There’s a certain faction of the American political system that has embraced George Zimmerman as a hero,” Scarborough said Monday morning. “I said from day one, during the trial, that it was going to be hard to convict this man. That doesn’t mean that many on the far right need to embrace this man, whose own lawyers are now running away from him.”

“Not only isn’t he a hero, he is a man who recklessly went in, was told by the cops to stay away,” Scarborough continued. “He disobeyed the cops’ orders and he kept chasing this guy. If you want to quibble about the last seconds, who was fighting whom, that’s fine, quibble about it. This is not a man that Republicans should embrace as a hero. He is anything but a hero.”

The panel also wondered if Zimmerman’s lawyers had indicated through their comments that they didn’t believe Zimmerman was innocent of the murder.

“Whether or not you think George Zimmerman got away with murder,” Willie Geist said, “and a lot of people do—”

“Sounds like his attorneys think he did,” cohost Mika Brzezinski said.

“—you still took the life, however it happened, of a young kid with that gun.”