Scarborough: Why Doesn’t Clinton Just Say ‘I Screwed Up’?
VIDEO

Scarborough: Why Doesn’t Clinton Just Say ‘I Screwed Up’? 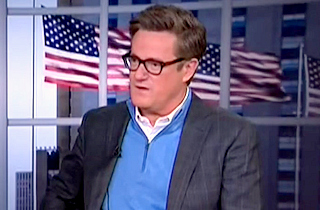 Hillary Clinton finally (in the hyperspeed of the modern media world) addressed the New York Times report that she used a personal email account and server to conduct State Department business, giving her “highly unusual” levels of control over the accessing of those emails.

But Morning Joe host Joe Scarborough, responding to Hardball guest from the night before who dismissed the story as an obsession with servers, wanted to know Thursday morning why Clinton didn’t just admit a mistake like a normal.

“I don’t know why they can’t just say, ‘I screwed up! I made a mistake! I am sorry. I was too clever by half. I want your trust. And what I did was not about a vast right wing conspiracy. It wasn’t just about a server. It was about my poor judgment. I’m really sorry. Guess what everybody would say? ‘Okay.'” [cough]

“But there is something in the Clintons that do not allow them — there’s always a ‘vast right wing conspiracy,'” Scarborough continued. “There’s always the media coming after them. There’s always a blood sport. It’s never about them when, in fact, it’s always about them. Why can’t they just say, ‘We screwed up, we’ll do our best not to do it again, let’s move on?'”