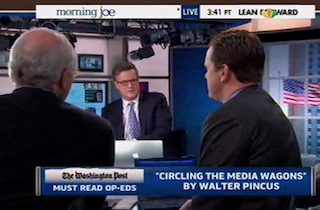 Morning Joe dedicated a segment to the Justice Department scandal and Attorney General Eric Holder on Wednesday — expressing some skepticism toward Holder’s reported remorse after he signed off on the James Rosen warrant. While the debacle has turned the media against the White House, both Joe Scarborough and Willie Geist agreed that it’ll be short lived.

“I could imagine he would feel remorse given the weight of law that has seemed to have fallen on reporters,” Mike Barnicle said of Holder’s “personal remorse.” But the press will be fine, he explained, noting that the cause for concern is the effect on whistleblowers and sources.

Geist chimed in that the remorse probably should’ve come earlier. “The Department of Justice has done something previously unthinkable, which is to turn, probably fleetingly, the media against the White House, against the Obama administration,” he added. “Which is a hard thing to do. I’m sure it will pass.”

“They may be picking flowers in their garden right now to take a bouquet over to the White House,” Scarborough quipped, agreeing.

As Steve Rattner added that the government has a responsibility to stop leaks that are damaging to national security, the panel disagreed a bit over whether that means going after journalists or those in the government doing the leaking.

“By the way, if you’re in the White House, leaks have enraged every chief executive, every president nonstop,” Scarborough noted. “That part of it is understood. What is not understood is the targeting of the journalist. Need to have a softer touch.”