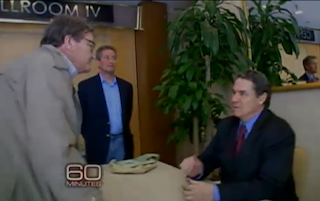 “You seem to be saying that most of it is BS,” says 60 Minutes’ Steve Kroft towards the end of a report on Greg Mortenson, summarizing the comments of one of the man’s critics. Mortenson is the writer and humanitarian whose inspirational books like the bestselling Three Cups of Coffee tell the story of his attempt to build schools in wartorn Pakistan and Afghanistan. The scathing segment begins with accusations that some of the books’ most heartwarming stories are made up and ends with a look at the schools that Mortenson’s Central Asia Institute non-profit claims to have made, finding many half-built, abandoned, or completely nonexistent.

In its extensive take down of an “inspirational” author, the segment called to mind the implosion of memoirist James Frey back in 2006 with a few key differences. Frey wasn’t running an organization that was getting tons of donations from people as high up as Barack Obama himself. Also, the 60 Minutes piece is notable in that it points out that Mortenson isn’t all lies, especially in a comment from one of the main critics, fellow author Jon Krakauer. Krakauer explains that, even if much of the stories is false and Mortenson may run his charity like a “personal ATM,” the man has helped thousands of children. Just not as many or as well as he may say.

Still, those few seconds of the 15 minute segment aside, this is a damning takedown. For anyone whose career depends so strongly on a squeaky clean image, the tax statements showing CAI spends more on promoting Mortenson’s books (proceeds of which go entirely to him) and the shots of empty schoolhouses are going to be pretty hard to shake. Kroft even mentions the author’s use of private planes which Al Gore can attest is the currently in vogue symbol of a wealthy humanitarian’s hypocrisy.

Will this segment be the beginning of the end for Mortenson and his organization? There was no crying Oprah like Frey got, but chances are good that it’ll still hurt. A lot.

Check out the 60 Minutes report from CBS News below: