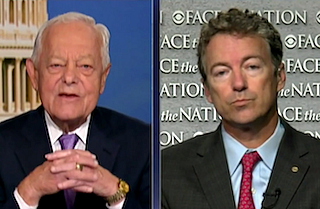 Face the Nation host Bob Schieffer grilled Senator Rand Paul (R-KY) Sunday morning over the potential government shutdown as a result of the GOP effort to defund ObamaCare, asking Paul if the bigger problem wasn’t the Democrats fighting the GOP’s wishes, but the infighting amongst the Republican Party.

“I am old enough to remember when Barry Goldwater ran for president in 1964, and he said ‘I would rather be right than president,'” Schieffer said. “He got his wish; he lost in a landslide. Aren’t you and the other tea party leaders leading the Republican Party to the same fate?”

“Once things are passed, doesn’t mean they are set in stone and no future Congress will look at them,” Paul said. “Historically, Bob, the way it worked is if the House is Republican and passed something and the Senate was Democrat and passed something you had a conference committee, equal number of Republicans and Democrats, and you hashed out your differences. Why don’t we have a conference committee on this? You could appoint one today, they could meet tomorrow, and hash out the differences. That is the way it is supposed to work. Republicans and Democrats are supposed to find a middle ground. But right now the president is saying my way or the highway.”

Watch the full segment below, via CBS News: