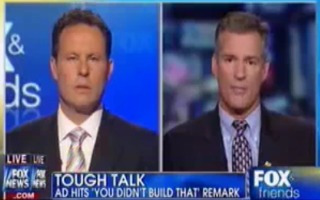 Appearing on Fox & Friends on Wednesday, Sen. Scott Brown (R-MA) discussed a new ad that his campaign recently released which focuses on the similarities between President Barack Obama’s defense of the public sector with that of his Democratic opponent, Harvard University Professor Elizabeth Warren. Brown called her a “jobs destroyer” and asked if anyone felt it would be better for the nation to have a “self-proclaimed rock thrower” replace him in the Senate.

Co-host Brian Kilmeade asked Brown why he decided to use video of President Barack Obama’s highly-publicized “you didn’t build that” remark in an ad targeting his senate opponent, Elizabeth Warren. Brown replied that he felt the President was echoing Warren when he made those controversial comments.

“People should know that Professor Warren made her statements over a year ago – they’re almost verbatim,” said Brown. “The President got bad advice from Professor Warren, certainly.”

“He says he has been taken out of context and Mitt Romney hasn’t been candid with him, and basically you’re doing the same thing with Elizabeth Warren,” Kilmeade asked.

“She has actually doubled down and believes that we should have more government interference and more government regulation and more taxes,” said Brown. He said that his ad shows “what America was and what it can be.”

Klimeade asked Brown about his tight race for a full term in the Senate from Massachusetts, which has fast become the top Congressional race in the nation for dollars raised and spent. “How are you dealing with all of this attention,” asked Kilmeade.

“I’m going to be the same person I’ve always been,” said Brown. “I’m an independent voter and thinker. I vote 54 percent with my party – I’m the second most bipartisan senator in the United States Senate.”

“Can you imagine 100 Professor Warren’s down there; a self-proclaimed rock thrower who wants to leave blood and teeth on the floor,” Brown asked.