Scott Walker Responds To Romney Comment: Firemen And Police Are Not ‘Big Government’ 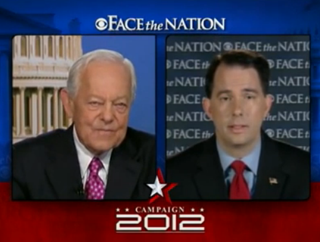 Wisconsin Governor Scott Walker may have a reputation for fighting union overreach, but he has no interest to going after firefighters, police officers, or teachers. This he told Bob Schieffer today on Face the Nation, in response to a question about Mitt Romney and his comments recently that the nation did not need any more public employees. Walker explained that when he thinks of “big government,” police officers don’t fit the bill– instead, he called stimulus legislation and regulation government overreach.

“Do the American people want fewer cops or firemen or teachers?” Schieffer asked, which Walker responded seemed to miss the original point. “People want someone willing to take on the tough issues,” he argued, suggesting that Romney “has a shot if the R next to his name doesn’t just stand for Republican, it stands for reformer.” Schieffer asked whether he thought Walker was referring specifically to getting rid of more teachers in the public sector, and Walker replied that he thought it was more than that. “The private sector still needs more help,” he replied, adding that “The answer’s not more big government. I know in my state, our reforms allowed us to protect firefighters, police officers and teachers. That’s not what I think of when I think of big government.”

Walker argued that, for many on the left, “success” is defined by “how many people depend on government,” a theory he refuses to accept. “More people on unemployment benefits is not success in America.”