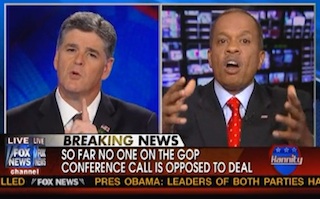 Cable news outlets brought out A-list talent yesterday to cover breaking news on the debt crisis, which worked out well since a last minute agreement led to some spirited discourse over the reported compromise between President Obama and congressional GOP. And no debate was more spirited than that on Fox News between conservative host Sean Hannity and left of center analyst Juan Williams,who discussed the agreement in a uniquely heated, fair, balanced and entertaining way.

Hannity introduced the segment by proclaiming that “liberals are furious with this deal” before asking if Williams was also upset. Williams concurred that in his esteem, this was not a good deal in terms of the direction the country should be going in. Then things sort of went haywire from there, in a mostly familiar discussion over the legacy of George W. Bush administration, Obama’s discretionary spending, and the effect of Bush’s tax cuts on federal revenue.

But while the debate hit many of the same talking points familiar to anyone who has watched opinion media in the last year, Williams gave just as good as he got, in pointing out to the host that much of Obama’s stimulus spending was on tax breaks. Following is a rough transcript of the heart of the back and forth:

Hannity: That was Obama’s bill passed without a single republican vote. unemployment is still 9.2 percent he promised it would prevent a calamity and catastrophe. this summer is worse than last summer.

Williams: In other words you have great ideas. in other words President Obama tried to spend some money cut taxes with everybody in the country. 40 percent of the stimulus spending all you can do is say well it didn’t exactly work as he predicted as opposed to saying he tried something (cross-talk) what Republicans are doing all along.

Hannity: here’s what i am saying to you Juan. this is important. this is why I admire the Tea Party conservatives. Instead of 10 trillion in new debt in ten years it will only be 7 trillion in new debt. every year they spend more money. like the Tea Party conservatives are saying free spending right now at this year’s level let’s cut one percent a year. One percent a year every year for six years, we won’t burden our kids with another 8 trillion in debt ore 10 years. This is compromised and when does standing on principal and balanced budgets become such a crime you have to be called a hobbit and a draconian cutter that is throwing grandma over the cliff.

Williams: You know what’s interesting about this to me? I am sensing Sean is not even arguing with me he’s arguing with himself. You are accustomed to representing conservative points of view, here you have such a fracture among conservatives those saying they are a hobbit in the tea party hurting the party’s chances in 2012, putting him in a position to say the republicans damaged the economy. It is hurting you and you don’t want to deal with it.

And so it went…the exchange became heated at times, but never disrespectful, and provides a nice thumbnail for the what we can expect to hear in the next several weeks and months leading up to the “super committee” report due next November as part of this agreed upon compromise.

Watch the back and forth below, courtesy of Fox News: