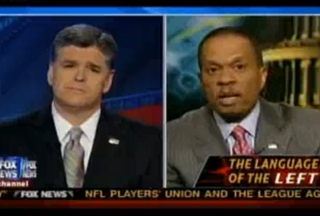 We’re now approaching the two-and-a-half year mark on Obama presidency and the race issue, far from having waned, continues to span the forefront of American politics. With a recent book claiming President Obama described racism as the “subterranean agenda” of the Tea Party, Sean Hannity collected the red flags signaling the President had race concerns of his own, but fielded a formidable challenge to substantiate his claims from a skeptical Juan Williams tonight.

The “subterranean agenda” quote originates in author Ken Walsh‘s latest book and, compiled with quotes from both the President and the First Lady, Hannity is quite concerned race is negatively impacting the President’s perspective. Complaining that the right is being wrongfully stigmatized as racist, Williams countered that there unquestionably were elements of the American political scene that exhibited racist tendencies. “I think it’s a mistake to say the Tea Party movement is a racist movement,” he clarifies, but adds that much of what protesters said and did was “mocking and I think it was very insulting to the President.”

Hannity agreed but noted that the left was equally upsetting, particularly against Wisconsin governor Scott Walker. Williams agreed, though he added that “given the racial sensitivities in our history… I think people are going to pay attention” when the right attacks the President ad hominem. Hannity refused to cede the point, however, continuing to site questionable quotes in from the Obamas’ history– particularly the famous comment that many on the right are “clinging to their guns and religion” and comments by Michelle Obama that she had not previously been proud of America. “Isn’t that revealing?” Hannity asked. Williams grumbled somewhat, especially at the point that Americans should be questioning the President’s claim that a “black values system” helped him keep composure during the election, but did add that the President should be “subjected to legitimate criticism when he says something outrageous.”

The conversation, while spirited and certainly respectful, ended in somewhat of a stalemate in that both Williams and Hannity agreed on key points, just not on the emphasis meant to be placed on each. In fact, for such a lively debate, it may have been one of the more unifying on the program in recent memory, with both concluding that yes, there are angry and unsavory people on both sides of the political spectrum, but they should probably not be taken as exemplary of that side or their ideology. Hannity got Williams to agree that the “caricature of the American right as racist” was unfair– now if only Hannity could admit that fringe elements on both sides exhibit racism, perhaps the race issue could reach something  close to resolution, before Obama’s first term ends.