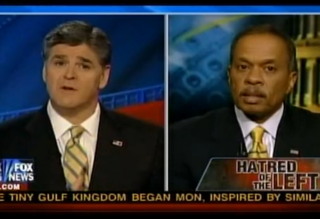 Former radio talk show host and Tea Party favorite Herman Cain may be the first Republican 2012 candidate out of the gate this year, and as such may be the first African-American conservative to earn the title. While November 2012 is still more than a year away, Sean Hannity has already uncovered what he considers to be heinous racist rhetoric on the left, and Juan Williams, visiting the program tonight, appeared to wholeheartedly agree.

Hannity noted an article from left-wing site Alternet which accused Cain of pandering to “white conservative masters” for agreeing to give a speech at last week’s CPAC, and while he did call the rhetoric “disgusting,” gave Williams most of the segment to explain the reaction from the left to African-American conservatives. Noting that “every African-American conservative I know faces this problem,” he asked Williams for clarification, and he shared, in part, his experiences, though Williams self-identifies as a liberal.

“I get this all the time!” Williams noted upon Hannity highlighting the problems that African-American conservatives seem to face with the media, according to the host. He listed several black conservatives– Cain, Justice Clarence Thomas, even Bill Cosby— who have come under fire for right-wing remarks. “The guy who write this kind of trash,” Williams argued, “they act as if Herman Cain has no intellect, as if he has no individual sense of what he can and cannot say.” Adding that he considering the arguments “sickening,” he also hinted at a double-standard by claiming that “the minute some rapper shows up and starts using the n-word– thats the real deal!”