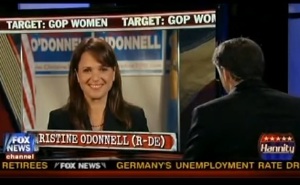 Credit where credit is due. Last night Sean Hannity had on as his guest GOP Senate candidate Christine O’Donnell, and very delicately broached the subject of yesterday’s controversial and anonymously-penned story that appeared in Gawker that outlined a “one night stand” with the candidate. Hannity brought it up in the safe and predictable context of “liberal media” attacks on GOP women candidates.

How did O’Donnell reply? Alas, she did not take the bait, claiming that she had such a busy day that she did not know what specific attack on her that Hannity was referencing, which, given the breakneck pace of late October campaigning, is a completely credible explanation. Another explanation is that O’Donnell simply didn’t want to address the story, which given some of the sordid details, is also completely understandable.

O’Donnell’s campaign did issue an official statement via the candidate’s Facebook page:

This story is just another example of the sexism and slander that female candidates are forced to deal with. From Secretary Clinton, to Governor Palin, to soon-to-be Governor Haley, Christine’s political opponents have been willing to engage in appalling and baseless attacks — all with the aim of distracting the press from covering the real issues in this race. Even the National Organization for Women gets it, but Christine’s opponent disturbingly does not. As Chris Coons said on September 16th he would not condone personal attacks against Christine. Classless Coons goons have proven yet again to have no sense of common decency or common sense with their desperate attacks to get another rubber stamp for the Obama-Pelosi-Reid agenda. Such attacks are truly shameful, but they will not distract us from making our case to Delaware voters — and keeping the focus on Chris Coons’ record of higher taxes, increased spending, and as he has done again here, breaking his promises to the voters.”

The National Organization for Women (NOW) on Thursday condemned the tabloid website Gawker for publishing an anonymous account: NOW issued a statement late Thursday stating that “sexist, misogynist attacks against women have no place in the electoral process, regardless of a particular candidate’s political ideology.”

“NOW repudiates Gawker’s decision to run this piece. It operates as public sexual harassment. And like all sexual harassment, it targets not only O’Donnell, but all women contemplating stepping into the public sphere,” said NOW president Terry O’Neill.