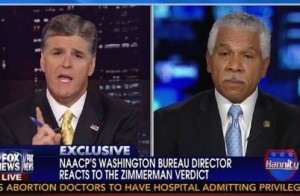 Sean Hannity tonight confronted NAACP Washington Bureau Director Hilary Shelton over the group’s involvement in pressuring the Department of Justice to pursue civil rights charges against George Zimmerman. Shelton said the verdict was completely unfair, though it was mostly due to “very faulty self-defense policy in the state of Florida.” The discussion got heated when Hannity turned to Chicago and pressed Shelton to name a single person killed there during the Zimmerman trial.

Shelton and Hannity tussled over whether Zimmerman was within his legal rights to act in the way he did, with Shelton insisted he did not act how community watchmen are supposed to, particularly with the gun on his person. Shelton insisted Zimmerman was stalking Martin, even citing Rachel Jeantel to back him up, but Hannity shot back that she also said Martin instigated the fight between them. Shelton still maintained, “He did not have a right to intervene.”

Hannity called him out on why he was ignoring the beating, and when Shelton avoided the question, he remarked, “You’re like Chris Matthews!” Hannity also challenged Shelton over why the NAACP is pressuring the Obama administration to take up civil rights charges, remarking “that sounds like people that disagree with the verdict are being sore losers and now want to make this guy’s life a living hell.”

Hannity then told Shelton there were 61 people killed in Chicago during the Zimmerman trial, and challenged Shelton to name a single one of them. Shelton dismissively started, “I appreciate this talking point,” before firing back that many of the perpetrators in Chicago are not apprehended. Hannity continued pushing on why the NAACP doesn’t talk about this, which led Shelton to remark, “I wish you were a member of the NAACP and knew as much about us as you think you do.”

When Shelton claimed that Zimmerman admitted he was looking for black people because that was who was committing crimes in the community, Hannity shouted, “That’s not true! You’re making that up!”