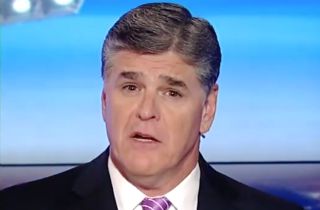 Fox News host Sean Hannity reported on air October 21 that 250,000 Syrian refugees were going to be settled in the United States, a wildly incorrect figure that appears to have originated from a parody website.

“You see the backlash emerging now in Europe over the refugee problem from Syria and Iraq,” Hannity said. “The president said he’s going to bring in 250,000 refugees into this country. My fear is, and our national intelligence director James Clapper said, that ISIS in Iraq will infiltrate the refugee population.”

“If that’s the case, I don’t think we can risk taking one refugee in, although we can help probably on a humanitarian basis,” he concluded.

His guest Jeb Bush, to his credit, said he had “never heard” anyone talking about the U.S. taking in 250,000 refugees. Turns out the reason Bush never heard the claim is because he doesn’t read hoax websites.

Politifact rated Hannity’s claim “Pants on Fire,” their lowest rating for truthfulness. The site points out that the Obama administration is currently only talking about resettling 10,000 refugees, and that the United States only budgeted enough money to accept 85,000 refugees from every country combined.

The 250,000 figure, which is also often quoted by Donald Trump, appears to originate from parody website realnewsrightnow.com, which claimed the U.S. was resettling a quarter of a million refugees in Indian reservations. The other top headlines on the site include “Trump: I Would Have Prevented the Asteroid From Killing the Dinosaurs” and “Pyongyang to Host 2017 Gathering of the Juggalos.”