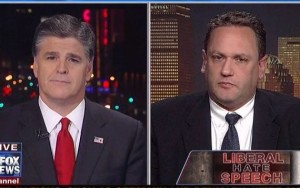 Sean Hannity went after one of his favorite targets tonight: the liberal media, and in particular, liberal talk radio hosts spewing what Hannity deemed “hate speech.” He and guest Brian Maloney went after liberal radio hosts for propagating such hate speech, especially Ed Schultz, who has gone on tirades about everything from Dick Cheney to why in the world women would support Mitt Romney.

Hannity played audio of Schultz saying outrageous things about Cheney and calling Laura Ingraham a slut. Hannity pointed out that Schultz did not get in that much trouble for any of those comments, wondering aloud if the same kindness would have been granted to him. Maloney mocked Democrats for supposedly being “the party of decency and respect.”

The next liberal radio host that got highlighted was Stephanie Miller, who joked that the GOP is becoming a “rape-y party” and that Mitt Romney is “sweating like a whore in church.” Maloney dubbed this another example of the liberal “smear movement,” and said that conservatives can’t just ignore such remarks assuming that not very many people have heard what they said.

Hannity concluded the segment with another clip of Schultz, this time yelling at female viewers to wake up and not even think about voting for Romney. Hannity and Maloney both laughed at the outlandishness of Schultz’s remarks, with Maloney explaining that he has documented plenty of examples of liberal hate speech on the radio that no one has ever been made aware of.