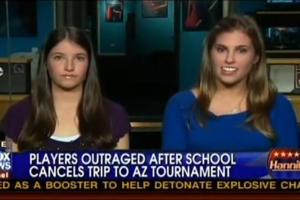 Last night, Sean Hannity took to fighting the Highland Park, Illinois school system Sarah Palin is furious at over their refusal to allow their high school girls’ basketball team to travel to Arizona for a tournament. Their reasoning for preventing them from going was an opposition to the new Arizona illegal immigration law. Hannity had two of the girls from the team on the show to discuss their reaction to not being able to compete in Arizona, and they admitted they were, for the most part, confused.

Hannity seems to be making a regular segment out of political outrage over influencing children, and he wasted no time to blame Barack Obama, who attacked the Arizona bill, for spreading misconceptions on the bill. To his credit, Hannity also put his money where his mouth is and offered to contribute towards funding the team’s trip to Arizona. The girls answered their questions, understandably, as apolitically as possible, stating that their reaction to being told that they would not be able to compete was that it was “stupid” and were “kind of confused, I don’t really know what they meant.”

They emphasized that they had no significant opinion about the Arizona law, although they thought “a lot of people need to do some of their homework. Instead, they argued that they were “just trying to play basketball, and don’t think our beliefs” have any influence in how they choose tournaments to play in. And, yes, they confessed, although the team was trying to find a new place to compete, “Arizona is still their number one choice.”