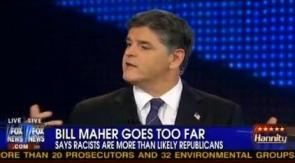 Whatever temporary good will Bill Maher garnered from his Friday monologue touting how much “better” Western culture was than that of fundamentalist Muslims, it was gone after his Sunday appearance on This Week, when he discussed the racism within the Republican party.

Last night FNC host Sean Hannity and his African American guests from both sides of the aisle tackled the issue.

The quote from Maher on This Week was the jumping off point for Hannity’s discussion:

I have never said, and would never say, because it’s not true, that Republicans, all Republicans are racist. That would be silly and wrong. But nowadays if you are racist, you are probably a Republican.

An important distinction (whether you agree with Maher’s point or not). Well here’s how Hannity asked the first question to his guests, directly after playing the Maher quote: “What he is saying, basically trying to advance the narrative that if you’re conservative, if you’re Republican, you are racist, right?”

No, not right. In fact, that’s the opposite of what Maher is saying. Again, it’s not that all Republicans are racist, it’s that most racists are Republicans. There’s a debate to be had about that point, but it was disingenuous for Hannity to mischaracterize Maher’s comments, and it set the tone for a debate not based in fact.

His guests were Star Parker, a conservative California congressional candidate and James Peterson, Bucknell University professor. They argued over which party was better for the African American community, and later discussed the racism they’ve felt from various sources. Peterson, who has been a guest on Hannity before, described what would happen after the segment was over. “When i get off your show tonight, I’m going to get a series of emails, and they will be racist emails, and they will be directed at me just for appearing on your show,” he said. Hannity suggested they compare emails one day – hate mail, fair and balanced.