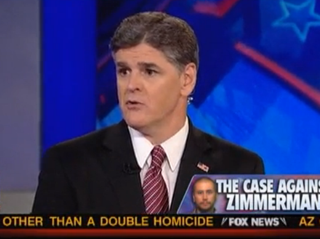 Now that the Trayvon Martin story has become a bona fide court case, the focus of the tale shifts from why George Zimmerman is free despite having committed homicide (lawful or otherwise) to what the results of the trial will be. On last night’s Hannity, Sean Hannity expressed relief that the system was now taking its course and support for Martin’s mother in her composure throughout the effort, and offered his prediction on what would happen: either Zimmerman would plea guilty to manslaughter, or manslaughter would be included in the trial.

Hannity’s panel– reporter Shannon Butler, attorney Crystal McCrary, and radio host David Webb— opened the discussion with what potential evidence the prosecution could bring to trial. Butler, who interviewed a witness early in the story who claimed Martin had attacked Zimmerman, confirmed that “there were at least two witnesses” saying Martin attacked Zimmerman, but the prosecution is rumored to have found some that saw the interaction between the two sooner, and perhaps saw Zimmerman provoke the encounter. She notes that “it was the girlfriend on the phone that really helped the prosecution on the case.”

Hannity argued that “this is why I kept saying nobody should rush to judgment,” and reiterated that it was possible a “horrible accident/tragedy” happened, as it is “possible that those two mindsets [Zimmerman’s and Martin’s] did not read the situation correctly [and] conflicted.” McCrary noted that she understood the racial elements of the case “as a mother of an African American son who has been profiled because he is African American,” but that “you can profile somebody and not be racist.” Webb countered that the problem with the racial element was that the case “isn’t about empathy, this is about empirical evidence,” and the media’s rush to judgment had been “the biggest deliberate tragedy” in the case aside from the family’s suffering.

Hannity concluded offering a prediction: “either they’re going to plea down to manslaughter… or it goes to trial and I think it would go down to a manslaughter.”