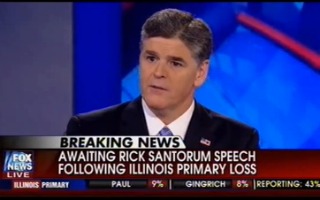 On his show Tuesday night, Fox News host Sean Hannity asked why it would be that President Barack Obama would decline an invitation to come onto the program for an interview. He has his own theory, of course…

“I mean, I’l tell ya, look…” he continued, “I think there’s a lot of people in the media — if you watch, you know, NBC and all these — they’re all sucking up to Obama. They won’t vet him like we’re going to do because they want interviews. Right?”

“If you were Obama, would you go on your show?” asked the poshly-accented Stuart Varney.

“He’s the President of the United States, Stuart,” Hannity replied. “I’d be respectful.”

“It’s very hard,” he added, “because I respect the office. And you have to be respectful to the President. Now, with that said, you can also… What bothers me about the media — and this is why we’re vetting Obama, this is why we’re showing all the excuses that we did before Governor Romney’s speech — is what’s frustrating to me is, he’s made all these excuses. People don’t put it together. So I figured I’m going to do this now until November. I felt like we did things that the media wouldn’t do in 2007 and ’08, Stuart. You know. It’s frustrating.”

Varney advised Hannity to really demand answers were he to ever do an interview with Obama, and warned him not to let the President “run out the clock.” Which is difficult to pull off, he noted, while still being respectful. Varney and Dana Perino then heaped praise on their colleague Bret Baier for his own interview with the President.

RELATED: Obama Blamed His Popularity Woes On Fox News, According To New Book

The three all decided that a good interview with the President would focus on his record, and not on his supposed claim that all Fox News does is declare that he’s a Muslim — a claim that all three agreed was incorrect.

Would you want to see the President speak with Hannity? Think he’d do it?