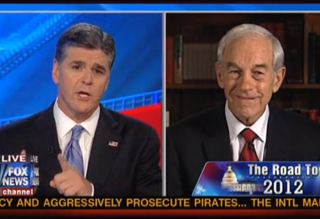 Rep. Ron Paul appears to be getting along with conservative stalwart Sean Hannity much better this time around than during the last election, when his supporters chased Hannity down a street and pelted him with snowballs. And while the two agree plenty on economic policy and the size of government, Hannity had a bone to pick with the libertarian icon tonight– namely bringing up comments Rep. Paul made elsewhere that his own rise to prominence would be “an embarrassment” to the comparatively liberal Hannity.

After a length discussion on Rep. Paul’s positions on the Federal Reserve and his plan to lower government spending by $1 trillion during his potential tenure, Hannity turned the otherwise friendly conversation somewhat tense, bringing up comments the Congressman made last week. When asked why he believed people like Hannity, radio host Mark Levin, and others seemed to be hesitant to support him, Rep. Paul responded that any more exposure for his stances would be “an embarrassment to them,” because they were recent converts to his ideas.

RELATED: Karl Rove: Ron Paul’s Base Is ‘Talking To Themselves,’ Need To Broaden To Win

Hannity took particular objection to being called a “statist,” and essentially asked Hannity, “what gives?” “Where did that statement come from?” he reproached. Rep. Paul replied that “I think somebody put those words in my mouth, and I didn’t deny it,” shifting the focus to the fact that his views were “now becoming pretty conventional” and that “indirectly, I do put a lot of pressure on them.” When pushed further to explain how Hannity was a statist, he insisted he “didn’t go out and volunteer this, but I don’ think there has been anybody leading the charge,” noting that the “so-called conservatives in Washington” were frustratingly liberal.

Hannity then concluded the interview on another topic in which they differed, defense, where Rep. Paul proposed very large cuts in the military and opposed intervention in Libya because, among other things, “we’re broke.”