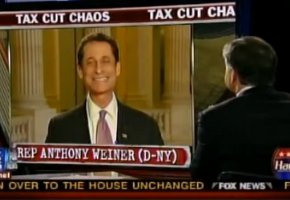 Less than a week after a contentious appearance on America Live with Megyn Kelly, Rep. Anthony Weiner (D-NY) gave Fox News another shot last night with an appearance on Hannity to discuss the potential Bush tax cut extension and tax philosophy in general. And while the overall conversation went better than this, the two men certainly had their share of differences (of course).

Weiner resisted Hannity’s assertion that he was suggesting President Barack Obama is weak for agreeing to extend the Bush tax cuts, but maintained he thinks the president could have struck a better deal, and decried the idea of “giv[ing] millionaires and billionaires a tax cut.” Hannity took exception to the way Weiner said “millionaires and billionaires, saying it “sound[ed] like a pejorative” and noting that such wealthy people create jobs.

They didn’t agree on any more from there. Weiner just kept saying he wished everyone could pay zero taxes, but said there’s a choice between standing up for the wealthy and standing up for the middle class. Hannity said he was dodging his question/missing the point. Hannity pressed Weiner for a concrete answer on the highest tax rate he’d accept enforcing. And they talked over one another a lot.

The best line, though, was when Weiner chided Hannity for caring more about “Rupert Murdoch’s tax break” than helping the middle class or trimming the deficit. Hannity’s response: “Thank God for Rupert Murdoch.” Hey, if he’d given us this high-profile a gig, we’d be thanking God for Rupert Murdoch too. Video of the segment, via Fox News, below.