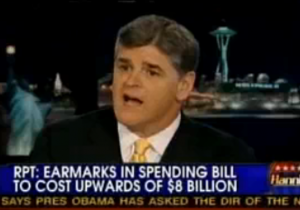 This has not been a good week for Sean Hannity. First political commentator Imogen Lloyd Webber discredited his arguments fact-by-fact, then congressman Anthony Weiner more than held his own in a shout-filled debate. Now on the issue of GOP senators including earmarks in the new spending bill, a seemingly hypocritical position even other FOX News anchors find confusing, never fear, because Hannity is on the case to . . . make you even more confused.

The pork-filled spending bill is currently larded up with over $8 billion in earmarks from both Democrats and Republicans. Don’t worry Republicans, Hannity is quick to rush to your defense:

There is a caveat to that, and that is like for example [Senator] Mitch McConnell. As these appropriations bills were making their way through the year he might have supported [the earmarks], but he’s now made a pledge after the election saying I got the message of the American people.

Conservative political commentator Margaret Hoover defends rational thinking, by arguing that the pledge is meaningless because McConnell still has earmarks in this bill now. Hannity defends McConnell saying “McConnell is opposing the bill, he always said he supported earmarks until after the election.” Newsflash to Hannity, now is after the election.

Although this does seem to be the popular GOP excuse to any charges of hypocrisy. Apparently, Republican earmarks in the bill don’t really matter since Republicans are voting against the bill anyway. This is in fact a sneaky hedge for Republicans to be able to both loudly oppose such wasteful spending, but, just in case it passes, also reap some final benefits for their home districts. Hoover accurately describes such a position as “posturing and disingenuous” and says it is not enough to just vote against the bill, but Republicans should also rescind their earmarks to prove they have heard the voters.

Hannity concludes by simply stating “any Republican that supports earmarks does not get the mood of the people” and plans to start in January naming names of any Republican who proposes an earmark. Until then though, Hannity is willing to defend the Republican position no matter how crazy it sounds, but isn’t that what loyal friends are for?