Sean McManus Out At CBS News

Sean McManus Out As President Of CBS News 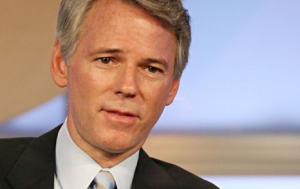 CBS has announced that Sean McManus will step down as president of CBS News. Jeff Fager, executive producer of the network’s iconic 60 Minutes, will take control of the news division as chairman of CBS News.

McManus will stay at CBS, moving into a new position as chairman of CBS Sports.

NEW YORK, Feb. 8, 2011 — Sean McManus, who has served as president of CBS News and Sports since 2005, has been promoted to the position of Chairman, CBS Sports. In this role, he will focus on the expanding portfolio of sports properties across all CBS Sports operations. The announcement was made today by Leslie Moonves, President and CEO of CBS Corporation.

In assuming this new position, McManus will step down from his role as President of CBS News. In a separate announcement, CBS promoted Jeff Fager, Executive Producer of 60 MINUTES, to the position of Chairman of CBS News; and David Rhodes, former head of U.S. Television for Bloomberg, to President of the News Division.

“Sports continues to grow into an ever-more important asset to CBS,” said Moonves. “As we expand our operations at CBS Sports, CBS College Sports Network and in other parts of our company as well, we will require Sean’s uncommon depth of knowledge of the business, his deal-making acumen and his unique and positive relationships throughout the world of sports to keep CBS on top of that game. I know all of us at CBS congratulate him on his new position as Chairman of CBS Sports.”

Moonves also expressed his thanks and appreciation to McManus for his contributions at CBS News. “In Sean, we are fortunate to have an executive who is truly versatile and tireless in pursuit of quality and success,” Moonves said. “While running our superb Sports Division, he has also done a terrific job steering CBS News through a period of transition and change, and the division is clearly on a better footing than it was the day he arrived. He departs this aspect of his post with CBS News boasting the #1 news program, the #1 Sunday morning broadcast and an award-winning and highly regarded evening news broadcast. I want to thank him for his leadership, and for maintaining the highest standards of journalism throughout his tenure.”

“It has been a great honor to run CBS News,” said McManus. “I’m especially pleased to leave it in the most capable hands imaginable, and proud of the fact that our division is well positioned for future success. At the same time, I am very excited about the prospect of focusing solely on the many opportunities before CBS Sports. The role of sports is an integral and growing part of our Company’s success, and I look forward to working even more closely with my colleagues in CBS’s cable and interactive divisions as we build on all we’ve accomplished. I also want to thank Leslie for giving me the opportunity to serve as President of CBS News, where I’ve been lucky enough to work alongside some of the most talented, dedicated and hard-working journalists in the business, and for this greater role at CBS Sports.”

Sean McManus was named President, CBS Sports, in November 1996 and President, CBS News, in October 2005. He is only the second person in the industry to hold both division titles simultaneously; Roone Arledge held both at ABC from 1977-86.

As president of CBS News, McManus aggressively worked to build a strong corps of reporters and develop the next generation of CBS News correspondents. He designated and assigned key beats while also adding strong veteran correspondents to round out the group. During his tenure, CBS News won more major awards than any other network’s news division, including one of electronic journalism’s most prestigious honors for an innovative, division-wide news initiative that he conceived and oversaw, “CBS Reports: Children of the Recession.” This months-long series of multi-platform reports on the effects of the dramatic economic downturn on America’s youth won the coveted Alfred I. duPont-Columbia University Award in January 2010.

During McManus’ more than 14 years as President of the Division, CBS Sports has become the year-round leader in network sports television. In November 1999, he led CBS to an unprecedented landmark agreement with the NCAA that extended the Network’s exclusive over-the-air broadcast rights, as well as rights to the Internet, marketing and corporate sponsorship, merchandising, licensing, cable television, radio, satellite, digital and home video to the NCAA Division I Men’s Basketball Championship through 2013. The 11-year pact was the most comprehensive sports agreement in history. In April 2010, together with Moonves, he negotiated a landmark deal, partnering with Turner Broadcasting to extend the rights to the NCAA Men’s Division I Basketball Championship through 2024. The $10.8 billion deal is the most extensive and far-reaching network-cable sports deal ever created.

As president of CBS Sports, McManus led the CBS Corporation’s efforts in acquiring broadcast rights to the National Football League in January 1998 and, in November 2004 with Moonves, re-negotiated the contract to retain the rights for CBS through 2011. In May 2009, Moonves and McManus re-negotiated the NFL contract to retain the rights for CBS through the 2013-14 season, which includes CBS broadcasting Super Bowl XLVII from New Orleans in 2013. He will continue to serve as executive producer overseeing all aspects of CBS Sports’ coverage of the NFL, including production, on-air talent, advertising and promotion. In addition, McManus will continue in his role as executive producer for the acclaimed show, INSIDE THE NFL, on SHOWTIME. McManus is a five-time Emmy Award-winner.

McManus reached a new multi-year agreement with the PGA TOUR to extend its broadcast rights through 2012 and to remain the TOUR’s dominant broadcast partner. He also extended broadcast rights to the PGA Championship through 2019. In addition, McManus extended CBS’s agreement with the United States Tennis Association to broadcast the U.S. Open through 2014, extended the agreement with the Big Ten to broadcast the conference’s basketball games through 2012-13 and extended the Southeastern Conference (SEC) football and basketball agreements in another landmark deal?a 15-year extension through the 2023-24 season. McManus also led CBS’s efforts in securing a partnership with SportsLine USA that created CBS SportsLine, now known as CBSSports.com, one of the most successful sports Internet sites. In January 2008, McManus began overseeing CSTV’s cable and digital businesses, initiating its rebranding as CBS College Sports Network.

Prior to his CBS Sports tenure, he was Senior Vice President of U.S. Television Sales and Programming for Trans World International, the television division of International Management Group, the world’s largest sports marketing firm (1987-96). Before that, McManus was Vice President, Program Planning and Development at NBC Sports (1982-87), becoming the youngest vice president in the history of the network at the age of 27. He was responsible for all programming and was instrumental in the rights negotiations for the Olympics, the NFL, Wimbledon, the Breeders’ Cup, the Orange Bowl, auto racing and NCAA college basketball. McManus joined NBC Sports in 1979 as an associate producer assigned to the NFL, Wimbledon, the PGA TOUR, “Sportsworld,” auto racing and the Tour de France. McManus began his career in 1977 at ABC Sports as a production assistant and associate producer. In 2010, he was inducted into the Broadcasting & Cable Hall of Fame. McManus is the son of the late legendary sports broadcaster Jim McKay. He graduated cum laude from Duke University in 1977 with a degree in English and history.