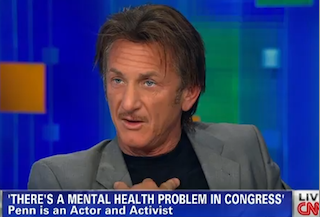 Sean Penn thinks some tea party members of Congress should be forcibly committed to psychiatric institutions. During an appearance on Piers Morgan Live Monday night, the actor and activist suggested treatment was needed to fix the “mental health problem in Congress.”

Penn managed to tie his recent work in Haiti to the recent situation in Washington, saying he decided to return home to his own “third-world country” during the government shutdown. When it comes to the tea party influence on the Republican Party, Penn said there’s a “mental health problem in Congress” that could be solved by “committing them by executive order.” Rather than “criticizing and attacking” the extreme right-wing of the GOP, Penn said we should be treating them. “This is a cry for help,” he added.

When Piers Morgan asked if we should “literally” commit people like Sen. Ted Cruz (R-TX), Penn said, “He’s my American brother and I think we should take care of him. He’s in trouble.” He attributed the problem both to “uneducated” Americans in general and the “solipsism” of people like Cruz specifically.

Unlike Haiti, Penn said in the United States “we have it all to make it great, but we find ways of self-destructing.” While he originally thought of the work his organization is doing in Haiti as something that could be replicated in other developing countries, he now sees it as a model for the United States.