Sec. Kerry: Putin ‘Not Operating From Position of Strength’ 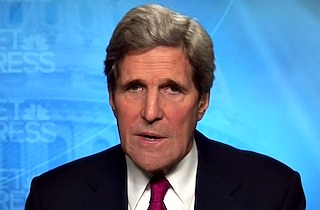 Secretary of State John Kerry came down hard on Russian President Vladimir Putin on NBC’s Meet the Press Sunday morning, telling host David Gregory that Putin was operating from a position of weakness in invading the Crimean peninsula, and would end up squandering the prestige he just spent $51 billion on in the Sochi Olympics.

RELATED: Stephanopoulos Grills Kerry: Is There Any Indication Putin Is Listening to Obama At All?

“He is not going to gain by this,” Kerry continued. “He may be able to have his troops for some period of time in Crimea unless he resolves this. But the fact is, he’s going to lose on the international stage, Russia is going to lose, the Russian people are going to lose. He’s going to lose all of the glow that came out of the Olympics, his $60 billion extravaganza. He is not going to have a Sochi G8. He may not even remain in the G8 if this continues. He may find himself with asset freezes on Russian business, American business may pull back. There may be a further tumble of the ruble. There’s a huge price to pay. The United States is united, Russia is isolated. That is not a position of strength.”