Sec. Kerry: We Never Said Anything About ‘Anytime, Anywhere’ Inspections 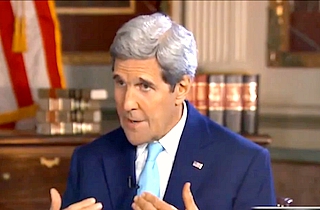 Secretary of State John Kerry and Secretary of Energy Ernest Moniz appeared on Fox News Sunday this morning to defend the tensely-negotiated Iran nuclear deal, arguing that the deal significantly reduced Iran’s nuclear development. “We are better off forever in term of Iranian nuclear weapons activity under this agreement than we would be without it,” Moniz said.

Host Chris Wallace pressed the pair on “anytime, anywhere” inspections, which were considered the gold standard of the deal, but which do not appear in the final settlement. Instead, Iran has almost a month before inspections to potentially cloak its nuclear activity.

“In arms control, there is no country anywhere on this planet that has anytime, anywhere [inspections],” Kerry said. “We have created a mechanism by which we can go to the United Nations, one country can take this to the Security Council, and we have the ability to snap back all the sanctions, or put any sanction on we want, if they do not give them access. That’s never existed previously.”

“But we never, ever had a discussion about anytime, anywhere,” Kerry insisted. “It’s called managed access. It’s under the IEIA. And the intelligence community has made it clear to us…that we would be able to know what they are doing in the intervening time.”

Wallace also asked why the White House was already focusing on overriding a veto rather than selling it to Congress for approval. Kerry said because the Republican Party was ideologically opposed to the deal.

“We’d love to get it approved,” he said. “Hopefully there are enough minds still open ready to consider it on its merits, that could be persuaded.”