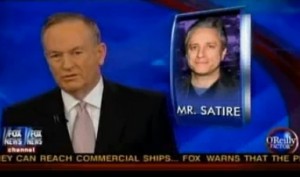 Bill O’Reilly took exception to being included in Jon Stewart‘s searing criticism of Fox News’ use of Nazi rhetoric in its opinion media programming. Focusing on a short clip sampled by Daily Show producers in which The Factor host compared “hate-filled blogs” with Nazi Germany, O’Reilly explained that the reference in question was taken out of context. Ironically, O’Reilly seemed to miss the context of Stewart’s criticism as well.

First, a bit of background. The rediscovered tone of civility in the days that followed President Obama‘s speech at the Tucson memorial was sharply interrupted last week by Rep. Steve Cohen (D-TN), who made what many saw as distasteful comparisons on the House floor, between the GOP and Nazi propaganda techniques. This culminated in a predictable set of finger-pointing by many media personalities, the last of which was Stewart’s searing rebuttal to Fox News’ Megyn Kelly‘s claim that Fox News’ personalities do not make gratuitous Nazi references (as her guest Richard Socarides had alleged on her show).

By way of rebuttal to Stewart’s rebuttal, O’Reilly played a short clip from the Daily Show segment and explained that it was presented without larger context, which was absolutely true. The clip in question focused on what appeared to be an extremely distasteful, and most likely anonymous, blog comment on Huffington Post that suggested that Nancy Reagan should die. In the context of that comment, one can certainly see how angry and horrified a self-described traditionalist like O’Reilly would become. But to compare an anonymous blog comment to Nazi techniques is a tad hyperbolic.

Further, the entire context of Stewart’s segment seems to have been missed by O’Reilly. This segment was not purely about over-the-top Nazi references that may appear on any network, blog post or floor of the House of Representatives. Stewart opened the segment by showing the Cohen comment followed by a series of Fox News personalities outraged over the Nazi reference. It’s within that context that the following clips of the very same personalities making similarly gratuitous Nazi references succeeded in making the criticism so sharp.

To be fair, O’Reilly ends his segment by pointing out that Nazi references made by elected officials on the House floor and those made by media personalities are not to be compared. But considering how the evidence suggests that Cohen made one comment, and media personalities seem to play the Nazi card so often, perhaps we should reconsider the net influence of politicians and political media types.

Watch the segment courtesy of Fox News below: