Sen. Ayotte On Benghazi Intel: Do They Think We’re Stupid Enough Believe They Were Trying To ‘Dupe’ Al-Qaeda?
Video

Sen. Ayotte On Benghazi Intel: Do They Think We’re Stupid Enough Believe They Were Trying To ‘Dupe’ Al-Qaeda? 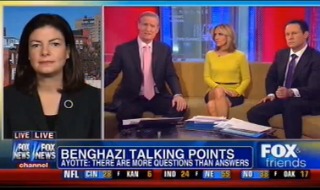 New Hampshire senator Kelly Ayotte appeared on Fox & Friends Monday morning, where she discussed the shift in talking points regarding the September 11 attack in Benghazi.

“We know that General Petraeus testified that they knew it was a terrorist attack right away,” said Ayotte, “that Al-Qaeda was involved and that that was removed, those references were removed from the talking points apparently provided to Susan Rice, that she testified that she talked about five days after the attack on every major news network. But here is what’s more troubling: It wasn’t just Susan Rice who did that. If you recall, the President went not only on Letterman, Univision, the day after the CBS interview and then 14 days later before the United Nations, he did not call it a terrorist attack, nor did he reference it as connected to Al-Qaeda or an Al-Qaeda-affiliated group. In fact, the only reference he made to Al-Qaeda in that UN speech to the world was that Al-Qaeda had been weakened and Osama Bin Laden was dead. So I think this raises additional questions. It goes beyond Ambassador Rice. First of all, why were the talking points changed? It doesn’t make any sense to me that we were trying to dupe Al-Qaeda. That doesn’t pass the laugh test. But also, why was the President out 14 days later and still fail to go call it a terrorist attack to the world?”

Later, host Brian Kilmeade asked about those who planned and committed the attacks, asking whether they’ve yet been brought to justice. “Have they been droned yet or had a book explode in their face?” he asked her.

“That’s one of the reasons why I called for the establishment of a Senate Select Committee,” Ayotte explained. “We need to get to the bottom of this. Clear picture, not this stove pipe investigation we see happening right now in Congress. We want to make sure we get the full picture. We also need to hold those responsible that murdered our brave Americans. This is so important, and we can’t lose sight of the big picture here and making sure this doesn’t happen again.”

“Do they think we’re that stupid to think we were trying to dupe Al-Qaeda by not telling the American people the truth? We’ve got to get to the bottom of this,” said Ayotte, adding that “we know that Al-Qaeda is on the rise around the world. That’s part of the bigger problem here.”