Sen. Boxer Lashes Out At ‘Obstructionist’ GOPers Boycotting EPA Nominee: ‘Get Out Of The Fringe Lane’
video

Sen. Boxer Lashes Out At ‘Obstructionist’ GOPers Boycotting EPA Nominee: ‘Get Out Of The Fringe Lane’ 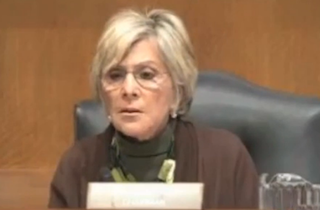 Boxer, chairwoman of the Senate Environment and Public Works Committee, argued that McCarthy is “perhaps the most qualified nominee to ever head” the EPA. She deserves the promotion, the senator argued, questioning whether Republicans would instead prefer “the head of some polluting oil company or coal company” get the job instead.

The letter stating the intent to boycott cited “reasonable and basic requests”:

“As you know, all Republicans on our EPW committee have asked EPA to honor five very reasonable and basic requests in conjunction with the nomination of Gina McCarthy which focus on openness and transparency,” they wrote. “While you have allowed EPA adequate time to fully respond before any mark-up on the nomination, EPA has stonewalled on four of the five categories. Because of this, no Republican member of the Committee will attend [Thursday]’s mark-up if it is held.”

“Their opposition, even to allowing us to vote, shows how outside the mainstream they are, it shows how obstructionist they are,” the senator continued. “It shows how their pledge to do better with women voters is false. How could you have a more qualified woman than Gina McCarthy? This is outrageous.”

“They’re fringe, they’re out of the mainstream,” she reiterated — and trying to impose their “pro-pollution stance” on the Obama administration. Boxer further noted that they’d be examining their parliamentary options, which would include potentially changing committee rules.

To the opposition, Boxer offered some advice: Take a page out of the mainstream Republicans’ playbook and “get out of the fringe lane.”

A look at some of the senator’s remarks, below: