Sen. Chuck Schumer: Romney Is ‘Desperately’ Trying To Be A Middle Class Candidate 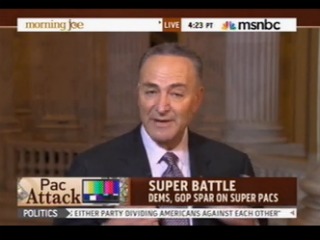 New York Senator Chuck Schumer appeared on Thursday’s Morning Joe to discuss his efforts in reining in the amount of corporate money spent on political campaigns.

Host Mika Brzezinski started things off by noting that Schumer’s colleagues in the National Republican Senatorial Committee “point out you are the number one recipient of Wall Street money in the Senate, and it’s funny you’re decrying the role of corporate money in the political process.

RELATED: Sen. Chuck Schumer On Debt Negotiations: Republicans Have ‘Walked Out On Everything’

“No, of course not,” he responded, “because they don’t want to address the issue. Number one, it’s not corporate money; that can’t be given to an individual. Second, and most importantly, it’s disclosed and disclosed immediately and there are limited amounts. $5,000 per individual. This is not millions of dollars anonymously given and running huge kinds of negative ads.”

“I don’t know that Chuck would be the first guy I sent out there,” said Joe Scarborough, noting that Schumer is referred to as The Senator from Wall Street. “I’m not knocking you for it, but I am asking, are you really the best person to come forward and decry the powerful interest of corporate money?”

“Well, I’d like to see some of my Republican colleagues doing it,” Schumer responded, decrying the way Super PACs have altered the system so that giant amounts of money are now anonymously funding (mostly) negative ads. Later, Schumer said that “the vast majority, when you look at the numbers, is on the Republican side because they have most of the wealthy, wealthy donors.”

“No, we don’t. No, we don’t!” Scarborough interrupted. “You’ve got all the rich guys on Wall Street that have supported Democrats for years, Senator!” To drive his point home, Scarborough asked Schumer which President — in all history — has received the most money from Wall Street donors. “I guess you mean Barack Obama,” Schumer responded.

He then offered his analysis of how Obama differs from Mitt Romney when it comes to reaching out and relating to middle class Americans: