Sen. Coburn Is “Disgusted With All The Media, Right And Left” 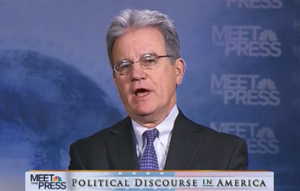 On Meet the Press, host David Gregory was curious whether Senator Tom Coburn agreed with some that political discourse describing disagreement over issues in “apocalyptic” terms was worrisome? However, Coburn was quick to dimiss the question as a media-generated “false premise.”

“I’ve pretty well been disgusted with all the media, right and left, after this episode, because what it does is it raises and says there’s a connection and the President rightly said there was no connection to [the Arizona shooting]. . . . And we’re spending all this time talking about political discourse rather than talking about the real risk to our country. We need to quit paying attention to what all the media says, we need to start watching, as [Sen.] Chuck Schumer has said, what we say.”

Gregory persisted by saying some on the right speak of President Obama as an “outsider who is trying to usher in a system . . . that will injure America and deny them of their liberty” and wanted to know if Coburn rejects that idea and also the use of violent metaphors in political discourse. Coburn agreed that he does reject that, and Senator Charles Schumer added “we as elected officials have an obligation to try and tone that down, and if we tone it down, then maybe the media will be less vociferous.”

In addition to seeing Schumer and Coburn agree with the proposal to sit near one another during the the State of the Union, it seems another bi-partisan agreement might be in the works. The plea of Coburn to Americans to stop watching the media and instead listen directly to the politicians. Hmm, not sure if that sounds as much fun.

Watch the video from NBC below: