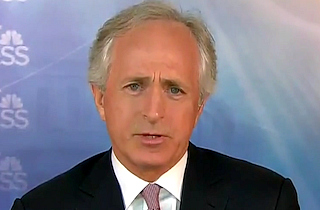 Senator Bob Corker (R-TN) told Meet the Press Sunday morning that the “wisest thing” Syrian President Bashar al Assad has done in his three-year civil war was kill people with chemical weapons, as it focused the west’s outrage on a brazen act and allowed Assad to continue to slaughter citizens in other ways — a situation Corker said was repeating itself with Russia and Ukraine.

“I think the [Obama] administration is basically saying to Russia, ‘Look, don’t do anything overt. Don’t come across the border with 40,000 troops. Don’t embarrass us in that way. But you can continue to undermine the sovereignty of Ukraine by doing the things that you’ve done,'” Corker said.

RELATED: David Brooks: Obama ‘Has a Manhood Problem’ in the Middle East

“It’s just like we did in Syria,” Corker said. “I hate to say such a crass thing on Easter Sunday morning. The wisest thing that Assad did, really, was kill 1,200 people with chemical weapons. Because in essence we said don’t embarrass us anymore that way. You can go on and kill another 60,000 with barrel bombs and by other means, but don’t embarrass us.”

“I think that’s what we’re saying to Russia today by the actions that we’re not taking,” Corker continued. “Don’t embarrass us, but you can continue the black ops activities. You can continue the other things that you’re doing. We know that over time you’re going to reach the goals that the prime minister so eloquently laid out before. You’re going to reach those, but don’t do it in a way that embarrasses us.”