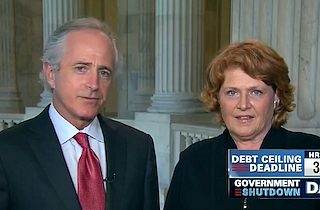 With rumors swirling that Senate Majority Leader Harry Reid (D-NV) and Senate Minority Leader Mitch McConnell (R-KY) have agreed upon a framework to reopen the government and raise the debt ceiling Tuesday morning, Senator Bob Corker (R-TN) told CNN’s New Day that “our side of the aisle” had wasted two months on an effort to defund Obamacare that was never going to happen.

“We’ve got to figure out a way to move ahead,” Corker said, appearing with Senator Heidi Heitkamp (D-ND). “In fairness, on our side of the aisle, we’ve wasted two months focused on something that was never going to happen. I won’t say that I did, but a number of folks did. What we could have been doing all this time is focused on those mandatory changes that all of us know our country needs, and we’ve blown that opportunity. I hate to say it.”

“Hopefully, what we will do is set up a framework that allows us to now move ahead and finally, hopefully, address the major structural issues that our nation needs to deal with to get our fiscal house in order,” Corker continued. “But that could have been done this time. It’s an absolute shame that we’ve wasted two months…But we’ve had this process basically hijacked.”

When asked why it took this long to dislodge opposition to the continuing resolution, Corker said, “Sometimes it takes a while for reality to set in. Look, we predicted we were going to be where we are today a long time ago. To be candid, it’s an embarrassment to me that we have spent all this time on a rabbit trail, leading us to where we are.”