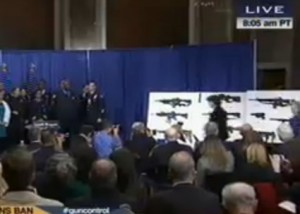 At a press conference in the Dirksen Senate Office Building Thursday morning, Senator Dianne Feinstein introduced an assault weapons ban that figures to improve on the 1994 ban that she co-authored, and which expired in 2004. In her remarks to reporters, part of an extensive program that included lawmakers and others, Senator Feinstein explained the improvements in the new law, while attempting  to assuage the concerns of gun owners by explaining that the measure protects hunting and sporting firearms, 2,200 of them by name.

Sen. Feinstein began by saying “Like all of you here today, I remain horrified by the mass murder committed at Sandy Hook Elementary School in Newtown, Connecticut, and am particularly grateful that we have both Senators here, and the House member representing that community.”

“I’m also incensed that our weak gun laws allow these mass killings to be carried out again, and again, and again in our country,” Feinstein continued. “Weapons designed originally for the military to kill large numbers of people in close combat are replicated for civilian use.”

She went on to invoke the horrific mass shootings at Columbine High School, Virginia Tech, an Aurora movie theater, a shopping center in Tucson, and a house of worship in Oak Creek, Wisconsin. “The common thread in these shootings,” Sen. Feinstein explained, “is that each gunman used a semi-automatic assault weapon or large capacity ammunition magazine.”

Sen. Feinstein then explained the differences between the new assault weapons ban, and the one that expired in 2004. “We prohibit 158 specifically named military-style firearms… our bill also prohibits other semi-automatic rifles, hand guns and shotguns that can accept a detachable magazine, and have one military characteristic,” whereas the expired law only banned weapons with two such characteristics, as does the current, supposedly “strict” Connecticut assault weapons ban.

“The bill prevents and prohibits such specific loopholes as the slide iron stock, …thumb hole stocks and bullet buttons,” Feinstein continued. “These are all modifications that make it easy for manufacturers to evade the law. The bill prohibits semi-automatic rifles and hand guns with a fixed magazine that can accept more than ten rounds. A ban on importation of assault weapons and large capacity magazines. Elimination of the ten-year sunset.”

Sen. Feinstein also explained that the proposed ban will not have an effect on legitimate gun ownership. “Let me tell you what the bill will not do,” she said. “It will not affect hunting or sporting firearms. Instead, the bill protects hunters and sportsmen by protecting 2,200 specifically-named weapons used for hunting or sporting purposes,” versus only 375 weapons that were protected under the expired ban.

Here’s the clip via C-Span 3, followed by a summary of the new measure, from Sen. Feinstein’s website:

Following is a summary of the 2013 legislation: