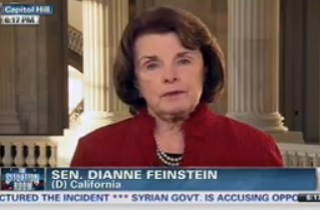 On Tuesday, Senator Dianne Feinstein announced that Senate Majority Leader Harry Reid had decided to drop her assault weapons ban from the package of gun violence prevention measures that the Senate is putting together. In an interview with CNN, Feinstein also revealed that Reid refused to even include a ban on high-capacity magazines in the package, but that she won’t give up on the measure. “This is very important to me,” she told CNN’s Brianna Keilar, “And I’m not going to lay down and play dead.”

Keilar began by asking Sen. Feinstein for her reaction to Reid’s decision, telling her “It appears your effort is all but dead.”

She played a clip of Reid telling reporters that he’s “not going to try to put something on the floor that won’t succeed. I want something that will succeed. I think the worst of all worlds would be to bring something to the floor and it dies there.”

Keilar noted that Reid “had said before that you deserved a vote. But it’s appearing now that it’s going to be an amendment that could ultimately just be a symbolic vote.”

Sen. Feinstein disagreed. “I did the bill in 1994 on the floor as an amendment,” she said, noting that “it went on to the House. It was enacted.”

“What Senator Reid told me is that I would have an opportunity for a vote,” Feinstein added. “I take him at his word.”

Sure, why wouldn’t you take Harry Reid at his word?

She also revealed that she tried to get Reid to include a ban on ammunition magazines containing more than ten rounds, separate and apart from the assault weapons ban. “I asked him if this could be part of a package,” Feinstein said. “He said no. And I took away from that meeting the belief that we would have a vote on the full bill, and a vote on ammunition-feeding devices of more than 10 bullets.”

“This is very important to me,” she continued, “And I’m not going to lay down and play dead. I think the American people have said in every single public poll that they support this kind of legislation. It’s aimed to protect children, to protect schools and malls. It’s aimed to dry up the supply of these over time. And it came out on a 10-8 vote of the Judiciary Committee. Not to give me a vote on this would be a major betrayal of trust, as I would see it.”

Sen. Feinstein’s fighting spirit and optimism are admirable, but aside from the very likely prospect that Harry Reid will find a way to keep these votes from happening, how did we get here?

Just days after the tragic, soul-scarring massacre at Sandy Hook Elementary School, President Obama announced a task force, led by Vice President Joe Biden, to come up with a set of proposals to combat gun violence. At that press conference, the President identified three things that were supposed to be the easy things to get done, the things people already agreed on:

Now, a scant three months later, two of those three measures are all but dead, Sen. Feinstein’s optimism notwithstanding. It’s easy for senators to tell Harry Reid that they’ll vote “no” on assault weapons and high-capacity magazines, but not so easy to actually look the Newtown parents in the eye, to look Gabby Giffords in the eye, and cast that “no” vote, knowing they’ll also have to look the next parent of a slain child in the eye, as well.

Senator Feinstein is right, failure to vote on these important, life-saving measures would be a major betrayal, but not one that will go unanswered. What that answer will be remains unknown, but if those votes do happen, voters will known just whom to punish, and whom to reward. That’s exactly why I doubt very much that they will happen. I hope Senator feinstein is right.