Sen. Graham: ‘Apparently Nobody’s Been Listening to What McCain and I Have Been Saying’
VIDEO

Sen. Graham: ‘Apparently Nobody’s Been Listening to What McCain and I Have Been Saying’ 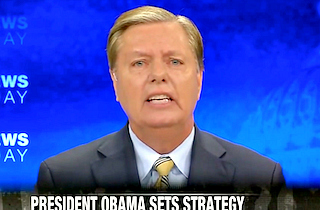 Senators Lindsey Graham (R-SC) and John McCain (R-AZ) have been two of the most frequent guests on the Sunday political shows over the past few years, but Graham is beginning to wonder whether anybody has been even been listening to them.*

Guest host John Roberts asked Sunday morning if the best way to fight ISIS is to embolden Iraqi and Syrian forces rather than rely on a U.S. military presence that could further inflame anti-American sentiment.

“I want a regional coalition,” Graham continued. “I want the Free Syrian Army in the fight. I want Arab countries in the fight. But here’s what I’m tired of hearing from this administration and my friends on the other side and within the party, that this is somehow easy and really not our fight. Name one Arab army you could put together anytime soon to deal with a terrorist army of over 30,000 without a substantial American commitment…I am tired of hearing from this administration how easy this is going to be.”