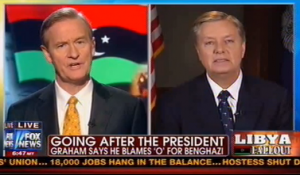 On Wednesday’s Fox & Friends, Sen. Lindsey Graham was asked to respond to the assertion that his and Sen. John McCain‘s criticism of Ambassador Susan Rice — following the attack on the U.S. consulate in Benghazi — has been based in part on a sexist or racist view. Graham readily dismissed the charge, noting that the only color he’s concerned with is “blood red.”

Steve Doocy noted that Rice went on television and said what “clearly was not true,” and that Graham’s and McCain’s ensuing criticism has some saying they “are sexist and racist.”

“Well, when you can’t answer the question you attack the questioner,” Graham replied. “The only color I’m worried about when it comes to Benghazi is red, blood red. The death of four Americans.”

“What motivates Sen. McCain and myself is that we were in Libya last September, we came back and wrote an op-ed piece that if we don’t form a national army to replace these militias, Libya’s going to break apart,” Graham elaborated. “And the sad story is not just the four dead Americans, which is heartbreaking, the Libya people want to move forward. And this leading from behind by Obama, we’ve done nothing to help them form an army to replace the militias.”

The senators have caught heat from some members of the Congressional Black Caucus, who have asserted that the criticism directed at Rice stems from her being an African-American women. Chair of the caucus, Rep. Marcia Fudge, recently said, “It is a shame that any time anything goes wrong, they pick on women and minorities.”

Rep. James Clyburn was more blunt in his assessment, saying that the charge that Rice “either willfully or incompetently misled the American public” was racially loaded. “These are code words,” he said. “We heard them during the campaign…especially those of us who were grown and raised in the South, we would hear these little words and phrases all of our lives and we’d get insulted by them.”