Sen. Graham To Candy Crowley On Having A Debt Limit Plan B: ‘I’m Focusing On Plan A’ 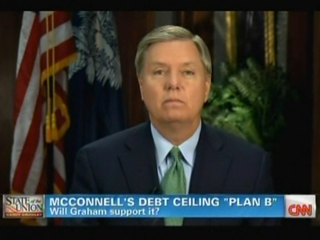 As the deadline looms for America defaulting on its national debt, the parties appear to not have inched any closer to a compromise. On State of the Union today, Sen. Lindsey Graham confirmed that he was sticking to the proposed “cut, cap, and balance” plan with very little wiggle room for compromise, and when asked whether he is prepared for the aftermath of the plan being shot down, he merely stated, “I’m focusing on Plan A.”

Host Candy Crowley asked Sen. Graham about how he felt towards the McConnell-Reid plan, which she noted she did not think was “completely put together yet,” but “would allow the president to raise the debt ceiling in three increments.” Sen. Graham expressed no confidence in the plan, noting that he was sticking to the “cut, cap, and balance” plan. “I don’t have any confidence that anything that Republican or Democratic leaders do is going to lead to the solutions that we need,” he argued, “it never has in the past.” Instead, he noted that he was “looking for a win-win” that would permit the raising of the debt ceiling.

Crowley acknowledge his position, but then asked whether it was a “solution,” to which he responded that he was open to cutting tax loopholes only “for a serious plan to balance the budget.” “If we don’t do that, we’re just kicking the can down the road.” Realizing that Sen. Graham had only proposed one plan, Crowley concluded asking what the “Plan B” was in case that deal was shot down– “will you allow the United States to go into default, or will you go to a Plan B?” “I’m focusing on Plan A,” Sen. Graham answered, without elaborating on whether there was a Plan B in motion. He concluded, somewhat enigmatically, “It’s the real deal, not a big deal.”