Sen. Hutchison Calls Out Rick Perry Over His Defunding Of Planned Parenthood On MSNBC
video

Sen. Hutchison Calls Out Rick Perry Over His Defunding Of Planned Parenthood On MSNBC 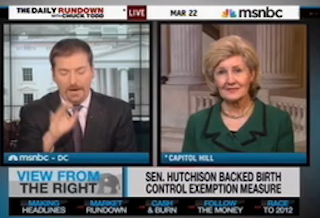 “Well, I just think that it’s wrong!” Hutchison hit back.

“I think that the contraception issue was made into something that it was not,” Hutchison responded sharply. “It was a religious freedom issue that a lot of people felt strongly about and certainly no one is saying that we should have a role in telling women they can’t have contraception, which is what the Democrats are suggesting! That’s absurd!”

“There’s a thing going on in the state of Texas that has to do with the Department of Health and Human Services saying they’re going to cut off Medicaid funding for family planning in the state of Texas because of the governor’s decision to implement a new plan that excludes Planned Parenthood from the state’s Medicaid women’s health program, was that a mistake?”

“We cannot afford to lose the Medicaid funding for low-income women to have health care services. We cannot,” Hutchison proclaimed. “We can’t keep turning back federal funds that every state gets and then try to find money in our budget which is already being cut in key areas like education. I do think that the governor needs to sit down with the federal government and work it out so that we can have our share, our fair share, and not more, but our fair share of money for Medicaid to help low-income women have their health care services.”

“So it sounds like you think that he should not be excluding Planned Parenthood?” Todd pressed.

“Well, you know, I can’t say — I think Planned Parenthood does mammograms,” Hutchison conceded. “They do so much — so much of the health care, the preventative health care, and if they’re doing that, then we need to provide those services. Absolutely.”