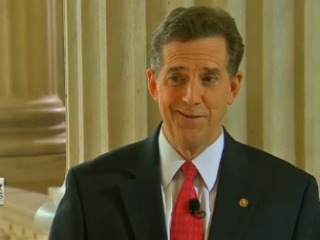 Senator Jim DeMint paid a visit to On The Record last night, and had some pretty strong words for President Barack Obama. In fact, he told host Greta Van Susteren that the President is practicing “venture socialism,” and offered to work with him on some alternatives for creating jobs and pumping energy into the economy:

I would love to work with the President on something. He’s practicing what we call “venture socialism.” He has taken an approach the government needs to stimulate jobs. I know as an employer, you don’t hire someone because the payroll tax is a little lower or you get a $4,000 tax credit. You certainly don’t if they are going to tax you more, which the President says, everybody making over $200,000 has to pay more of their fair share. They already pay 50 percent of all federal taxes now. Forty percent of that income is small business. What bothers me is I’ve been visiting businesses for the last month. They are telling me the same thing: that the President’s policies and the lack of certainty with the regulatory environment is killing them. They have money to invest. They believe in the American economy. But the President is killing jobs. It is hard to listen to him have a jobs plan when it is a political program to try to defer the blame of our economy onto the Republicans.

But unfortunately, according to DeMint, DC is not exactly known for its spirit of compromise and collaboration:

Unfortunately, we can’t collaborate with [President Obama]. It’s not we are not willing to work with him and compromise in a lot of ways, but the President is sold out to big labor, to radical environmentalists. And this isn’t a partisan comment, all you got to do is look at every bill he’s tried to pass. They are trying to expand unionization. What they are doing to Boeing in South Carolina is one of many examples of administration who puts union bosses before workers. Before jobs. He’s literally killing jobs across the country. I think Americans know that and you see thatthough that you see that in the polls. I think he could convince people a year ago that whatever he did right. Now I think whatever he says is questioned.

He went on to say that he means no disrespect, but that he President is “leading America in the wrong direction” by turning to “textbook Socialist” policies.

Have a look at the segment, courtesy of Fox News: