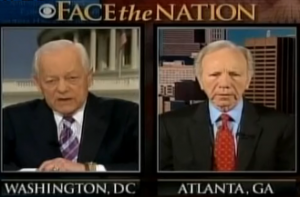 Independent Senator Joe Lieberman appeared on Face The Nation and told Bob Schieffer that as a result of the horrible events in Japan, it is time to “put the brakes” on development of new nuclear power plants here in the United States. Lieberman wanted to assure Americans that FEMA and other federal agencies are much more prepared for such catastrophes than they were a few years ago, but expressed hesitation to expand a commitment to nuclear power before we learn what happens in Japan.

“I don’t want to stop the building of nuclear power plants but I think we’ve got to kind of quietly, quickly put the brakes on until we can absorb what has happened in Japan as a result of the earthquake and the tsunami and then see what more, if anything, we can demand of the new power plants that are coming on line.”

Such a position clearly puts him at odds with some commentators who argue that more nuclear reactors are needed, and even has him disagreeing with Democratic Senator Chuck Schumer who is “still willing to look at nuclear energy.”