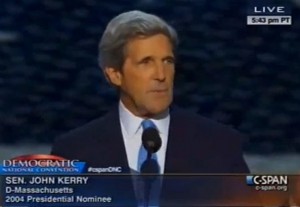 To be sure, Sen. Kerry had a lot to work with, but he made the most of the material. He started out on the attack, telling the crowd, “We’ve all learned Mitt Romney doesn’t know much about foreign policy,” and tied Romney to the Bush-era advisers who populate his campaign.

Kerry then went in for the rhetorical kill. “And after more than ten years without justice for thousands of Americans murdered on 9/11, after Mitt Momney says it would be naive to go into Pakistan to pursue the terrorists, it took President Obama, against the advice of many, to give that order and finally rid this earth of Osama bin Laden,” Kerry said, then to thunderous applause, added “Ask Osama bin Laden if he is better off now than he was four years ago.”

Sen. Kerry also delivered a brutal quip about Mitt Romney’s July mini-world tour. “For Mitt Romney, an overseas trip is what you call it when you trip all over yourself overseas.”

“You know, it wasn’t a goodwill mission,” he added, “it was a blooper reel.”

Kerry concluded with a rousing combination endorsement/shot at Romney, telling the crowd “Mitt Romney says he believes in America, and that he will restore American exceptionalism. I have news for him. We already have an exceptional American as President, and we believe in Barack Obama.”

Here’s the video, via C-Span: