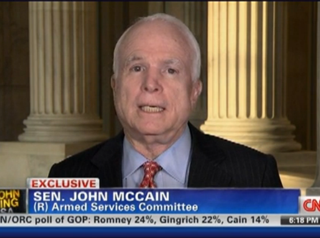 Sen. John McCain has been one of the most vocal Republicans speaking out against mistreatment of enemy combatants since the topic became salient once again upon the beginning of the War on Terror and, naturally, he was not happy to see his party so willing to use waterboarding techniques in interrogations in last Saturday’s debate. “Of course I am disappointed,” he told host John King on CNN today, arguing that waterboarding was “an affront to all the standards that we believe in” and clearly illegal as per the Geneva Conventions.

“Ask any military lawyer, ask any person who knows about the Geneva Conventions that we are signatories to,” Sen. McCain told King in response to the clips of, among others, Rick Perry and Rep. Michele Bachmann answering that the endorse the use of waterboarding on Guantánamo Bay detainees for interrogation. “We actually prosecuted Japanese war criminals specifically for the act of waterboarding against America.”

Sen. McCain made two points against the use of waterboarding, the first being that “it doesn’t work.” “If you put enough physical pain on someone, they will tell you anything they think you want to hear.” The second point was about America’s moral standing around the world. Sen. McCain lamented the impact of the Abu Ghraib scandal and added that “waterboarding is an affront to all of the standards that we believe in and adhere to of humane treatment of people who are human beings.” He repeated that it didn’t work, and that he still supported closing Guantánamo, though “the Obama administration has mishandled it so badly” that that is now not currently possible.

King also asked Sen. McCain whether he considered himself to the left of his party, to which he answered that, “judging from the applause,” waterboarding does seem to be popular among Americans. He put the onus on the President to change their opinion by “telling the American people about the Geneva conventions” and explain why it was prohibited when American soldiers were the victims.