Sen. John McCain: ‘I Will Do Everything In My Power’ To Block Susan Rice From Being Sec. Of State 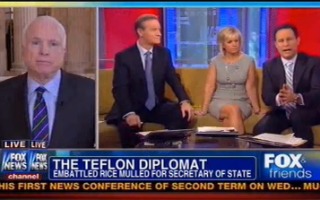 Senator John McCain appeared on Wednesday’s Fox & Friends, where he weighed in on the possibility that President Obama will name John Kerry as the next secretary of defense

“We have to give the President some ability to name his team,” said McCain. “At the same time, the Congress, the Senate of the United States has its responsibility of advise and consent. If John Kerry is named by the President, then he will be held responsible, obviously, for his past.”

Part of that past, host Gretchen Carlson pointed out, includes Kerry joking that “if you make the most of it and you study hard and you do your homework and you make an effort to be smart, you can do well. If you don’t, you get stuck in Iraq.”

As for rumblings that Susan Rice is a likely candidate for secretary of state, McCain was a bit more blunt, citing her comments about Benghazi shortly after the attack:

Susan Rice should have known better and if she didn’t know better, she’s not qualified. She should have known better. I will do everything in my power to block her from being the United States secretary of state. She has proven that she either doesn’t understand or she is not willing to accept evidence on its face. There is no doubt five days later what this attack was and for — Look, I was on Face the Nation that Sunday. Right after her came the president of the Libyan National Assembly, who said this was Al-Qaeda. And everybody knew that. And so she went out and told the American people something that was patently false and defied common sense.

As for whether he’d also work to block Kerry, McCain replied that “we’d have to look into it before I would want to do that.”

“I haven’t even heard the rumors that you just described,” he added. “But all of us are responsible for the things we’ve said and done if we’re going to serve the American people. But iId like to hold off and see what the story is before saying that, because I do give the President some latitude of naming his team.”