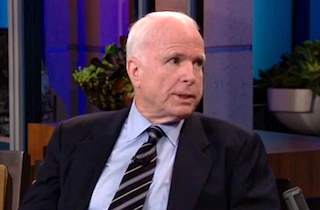 Appearing on the Tonight Show Friday night, Arizona Senator John McCain lamented the decline in Great Britain’s geopolitical muscle, especially given what he called the neutrality of the United Nations in response to chemical weapon attacks in Syria.

“I feel badly about the British,” he told host Jay Leno. “They’re our dear friends, but they’re no longer a world power. It’s just a fact of life.”

McCain’s comment came in the context of a critique of the United Nations for what McCain considers a lackluster response to Syria’s aggression.

“The U.N. has turned into an organization that, in my estimation, in many ways is a waste of taxpayers’ dollars,” McCain said. “Right now, the U.N. is in there ascertaining whether this was a chemical attack. And I think it’s fairly obvious, since you see these bodies stacked up with not a mark on them, and the head of the United Nations has said, ‘But, we won’t apportion blame.’ What? You’re not going to say who is responsible for it? That’s your tax dollars at work.”