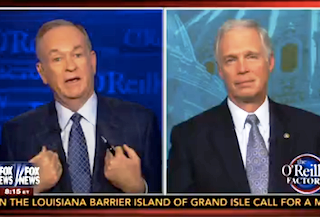 Fallout continued Friday night from a private GOP meeting that one unnamed attendee described as a “lynch mob” against Senators Ted Cruz (R-TX) and Mike Lee (R-UT). Sen. Ron Johnson (R-WI), who also attended the meeting, appeared on The O’Reilly Factor to defend the slightly more moderate flank of the Republican Party.

Johnson began by playing down the heated nature of the meeting. “We don’t yell at each other,” he said. “There are lively debates, there is good discussion, sometimes pointed questions, but it’s all within the bounds of collegiality and last week’s lunch I don’t think was any different than that.”

Bill O’Reilly pushed Johnson to open up about the “beefs” against Sen. Cruz within his own party. “I assume they were brought up at that luncheon.”

Johnson would only describe the event as a “full discussion of the whole defund strategy,” referring to the GOP’s attempts to defund the Affordable Care Act that ended with a government shutdown Tuesday. While he said he “didn’t support the strategy” he added that Republicans are “100% united” in their intention “to repeal, to defund, to limit the damage of Obamacare.”

On the strategy of Cruz and his allies, Johnson said, “You have to set yourself achievable goals, that’s just a problem with this effort. I appreciate the passion. I appreciate any effort that highlights how harmful Obamacare is going to be. But this strategy has really unfortunately divided us, it’s been destructive from that standpoint.”

Earlier this afternoon, Sen. Lee appeared on The Hugh Hewitt Show and described the behavior of his fellow senators in the meeting as “unflattering, unfair and demeaning.”