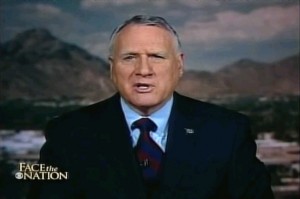 On Face the Nation, Senator Jon Kyl told Bob Schieffer that before blaming “vitriolic political rhetoric” for the tragic Arizona shooting, we should not “rush to speculate” since “we really don’t know what motivated this young person except to know that he was very mentally unstable.” This common sense reaction would not ordinarily be newsworthy, except for the fact that it bizarrely seems to be such a minority opinion amongst those speaking publicly about the incident.

“It’s probably giving him too much credit to ascribe a coherent political philosophy to him. We just have to acknowledge that there are some mentally unstable people in this country. Who knows what motivates them to do what they do.”

I wrote earlier about how I found the rush to assign blame for the actions of a senseless lunatic, before we know the shooter’s true motives, to be a worthless and opportunistic endeavor. And with Senator Dick Durbin, columnist Joe Klein, Keith Olbermann and many more rushing to speculate that Tea Party rhetoric and cable news theatrics are to blame, it seems like hysterical speculation is crowding common sense out of the conversation.

Kyl offered up the simplest and probably most likely explanation for the tragedy: sometimes a nut is just a nut. While everyone would prefer the shooter have a clear rationale and while all would want to do everything in their power to prevent another loon with a gun from being on the loose, the scary truth is that sometimes no explanation exists. Therefore, until any evidence arises to suggest otherwise, a focus on eliminating passionate political discourse is a misdirected, and often self-serving effort, since the unfortunate reality is that lunatics who commit such heinous acts likely lack the sanity to be listening to anyone else in the first place.