Sen. Graham Blasts Obama On Meet The Press: ‘It Seems Not Being Bush Is Our Foreign Policy’
video

Sen. Graham Blasts Obama On Meet The Press: ‘It Seems Not Being Bush Is Our Foreign Policy’ 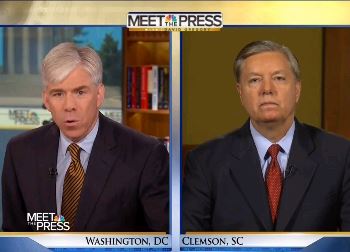 “It seems to me ‘not being Bush’ is our foreign policy,” Graham said. “The goal should be to basically make sure Assad leaves. Last year, Assad was isolated, he had very few friends, he was hanging by a thread. This year he’s entrenched with Hezbollah, Iran, and Russia, stronger behind him than ever. I think our goal should be, in the short term, to balance the military power, and providing small arms won’t do it. So we need to create a no-fly zone to neutralize Assad’s airpower.”

“Syria has become a powder keg for the region,” Graham said. “Our policies are not working, and AK-47s will not neutralize the advantage Assad has over the rebels.”

“I say a political solution is the only way you solve this and Assad must go to get a political solution,” Graham said. “No rebel group’s going to partition Syria with Assad still in power. So, yes, he has to go. Then you find a political solution. But if the war lasts six more months, Jordan’s going to go and Israel’s going to be surrounded by Syria on fire…The whole region’s about to blow up and our foreign policy, to me, I don’t understand it. Whatever it is, it’s not working.”

“Yes, our policy is to force Assad to leave,” David Ignatius followed up, “but our policy at a deeper level is to build up the moderate opposition to Assad. If Assad left tomorrow in a sense, that would be bad for us, because the strongest forces in Syria would be the jihadists, and you’d have complete chaos. So, in a sense, you want to wait a little bit for these forces to get stronger, for the U.S. arms to flow through.”

“I was told by my Syrian sources that just in the last few days, after this announcement, sixty Syrian officers defected because they thought maybe there’s a chance,” Ingatius said. “Six generals, twenty-two colonels. So, there’s one concrete sign on what difference it makes when the U.S. says ‘We’re with you.'”